This Monday morning started out pretty typical.  I had soaked some black beans the night before, and had just put them on to boil.  I did my usual half hour of yoga, then came back and covered my beans to cook for a couple of hours.  Matt kissed me good-bye and rushed out the door to catch the bus to work.  The kids were just starting to stir.  I was feeling great and ready to start the day.

My daughter, Minda, straggled into the kitchen.  She is 2 ½ years old, and going through the phase where she wants to do everything on her own.  This particular morning she wanted to make herself some granola.  She went to the cupboard to get a bowl, and that’s when it happened.  I heard a loud scream followed by some gibberish.  I looked and all I saw was blood all over her hand and tears streaming down her horrified face.  I knew in an instance exactly what had happened, she sliced her finger on the mandolin!

I rushed and grabbed her hand with my sweatshirt, trying to apply pressure to stop the bleeding.  I drug her across the house to where I knew we had some bandages.  I tried to put a Band-Aid on, but it was no use. There was too much blood for it to stick.  I was officially freaking out by this point.

I called Matt.  He jumped off the bus heading downtown, and got on the next one heading toward home.  I sat there holding pressure on her finger, and trying to get our shoes on at the same time so that we could go to the ER.  When Matt finally got home we decided that there was nothing they could do at the hospital that we couldn’t do at home since it was a slice and not a cut.  We cleaned and bandaged the finger, Minda stopped crying, and the excitement was over.

By this point I had totally forgotten about my beans.  They had been cooking for almost 3 hours, and were almost mush.  Not all hope was lost though.  I was able to take the beans and turn them into some amazing black bean corn tortillas, the base for these yummy sweet potato tacos.  The next time life hands you overcooked beans, make these tortillas, or just overcook some beans on purpose, they are that good.  If you don’t have time to cook your own beans or tortillas, store-bought one’s will work too. 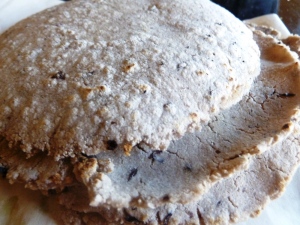 For the Black Bean Tortillas:

Heat a large cast iron skillet or griddle on medium heat.  Place the beans and water in a blender and blend about 10 seconds. In a large mixing bowl combine whisk together the masa and salt.  Pour in the bean water and work the mixture with your hands until the dough comes together in a ball.  If the mixture is too dry, add water a tablespoon at a time until the dough comes together.  Cover the ball of dough with a damp towel.  Pinch off about a golf ball sized piece of the dough and roll it between your hands to make a ball.  Press the ball with a tortilla press or roll out the dough into a 5 inch disk with a rolling-pin.  Carefully place the disk into the pan.  Cook the tortilla for 30 seconds per side.  Place the cooked tortilla on a plate and cover with a dry towel to keep warm.  Continue this process until all of the dough is used up.  This should make 10-12 tortillas.

For the Taco Filing:

Preheat oven to 375° F.  Line a large baking sheet with parchment paper.  Place the sweet potato, pepper, and onion on the baking sheet and drizzle with oil.  Pour the garlic and spices on top and toss everything together until the veggies are coated in oil and spices.  Cook in the oven for about 25 minutes, or until the edges of the sweet potatoes are brown.  Serve immediately on the tortillas.  Garnish with a couple of slices of avocado, cilantro, and sour cream.

I am a mindful plant eating mama to three little girls. I teach yoga in the Dallas area both to groups and one on one. I am obsessed with all things wellness and love helping others to feel their best! View more posts